The number of US small cap companies failing to turn a profit is near a record level, the Financial Times recently reported. This sounds ominous and may seem like a reason to think twice about allocating capital to the smaller end of the US equity market. While profits drive stock prices over time and form the basis of how investors value companies, it would be erroneous to simply conclude that an increased percentage of non-earners bodes poorly for small caps.

The chart below indicates that the percentage of small cap companies not earning a profit has risen to levels last seen in the aftermath of the Great Financial Crisis (GFC). This percentage also rose during prior recessions in the early 2000’s and the early 1990’s and peaked soon after the recessions ended. Rather than being a leading indicator, this peaking in the percentage of non-earners is coincidental with the end of a recession and the beginning of a new bull market expansion. While the historically high level of non-earners may make for an alarming headline, it is more useful to observe that the peak from a high level is a signal of better times ahead, as it historically has correlated with the conclusion of recessions and an economic recovery that will naturally bring the percentage of non-earners down. 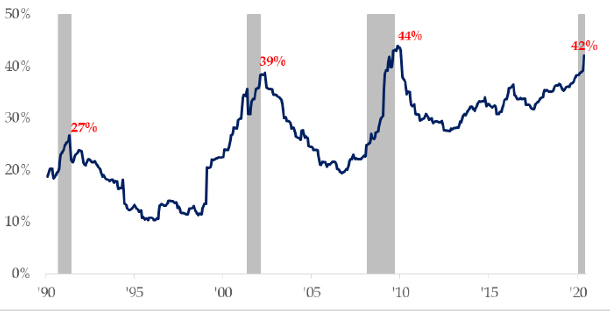 To better interpret this dynamic it is worthwhile to examine what causes the percentage of non-earners to rise and fall. Recessions, crises, panics and pandemics will negatively impact earnings of most companies, large and small, with small cap earnings typically impacted more than large caps earnings. However, macroeconomic conditions are only partially responsible for the rise in non-earners. Another important factor driving the percentage of non-earners higher since 2012-13 is the change in the industries and business models that make up the Russell 2000 Index. Over the past 20 years the U.S. economy has become increasingly driven by digitalization. The massive expansion of the Internet, widespread computer networks, ever faster broadband, smart phones and the sequencing of the human genome have had an enormous effect on the economy and the kinds of companies going public and achieving success. This trend has further accelerated in the past five to seven years as software and biotechnology companies, both of which benefit from digitalization, have unleashed a wave of disruptive innovation in their respective industries. As a result, the technology and healthcare sectors have grown and have spawned countless new companies. The mix of the small cap equity market has reflected this shift as sectors such as energy and other cyclical industries have declined in relative weighting while technology and healthcare have expanded. Specifically, over the past seven years the market has placed an increasing value on businesses with secular open-ended growth opportunities while at the same time there has been a surge in the number of software, biotechnology, med-tech (medical devices) and e-commerce IPOs. The increase in the weightings of the biotechnology and software industries within the Russell 2000 Index has been particularly notable. 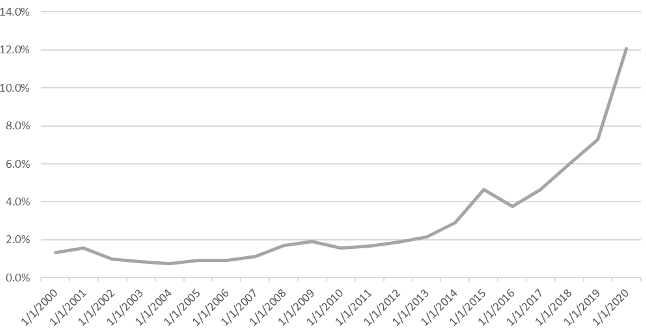 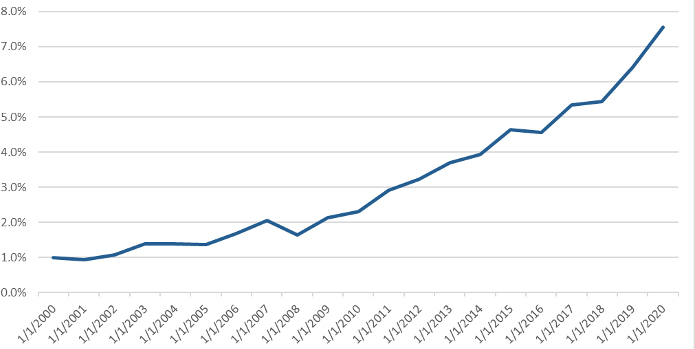 What does the increase in non-earners indicate about the quality of the companies that make up the small cap equity universe? We do not believe it is appropriate to draw a blanket conclusion that non-earners are synonymous with low quality. Biotechnology, software, med-tech and e-commerce companies account for the vast majority of the non-earners. Companies in these industries are typically unprofitable due to the high levels of investment needed to fuel rapid revenue growth and product development. While some may never become profitable, our research process has proven successful at identifying the companies in these industries that are of high quality and stand to disrupt larger competitors or create entirely new markets. Many that have come public in recent years have attractive, high-quality characteristics and superior outlooks relative to larger competitors:

As companies with these high-quality characteristics grow, mature and achieve scale, we would expect earnings leverage to follow with many leaving the non-earners category and graduating to the Russell 1000 Index. We have observed how the market has assigned higher valuations to these kinds of companies over time as they are proven to be consistent, high-growth, high-visibility business models and have executed well. For instance:

Biotechnology – Small cap biotechnology companies are often not profitable by design, as they heavily invest in research and development (R&D) to discover and develop new drug candidates. As a result, they are valued based on a variety of factors including peak sales and discounted cash flow (DCF). As their drug candidates get developed and ultimately approved by regulators, these can often become extremely high margin, profitable commercial businesses. Many successful ones also may get acquired before reaching that stage.

Software – Cloud-based, enterprise Software-as-a-Service (SaaS) companies spend heavily on sales and marketing to expand their sales forces and to grow their customer bases. SaaS business models are subscription-based and have very high visibility. The trade-off to this model is that near-term profitability is severely understated as customers pay their subscriptions over time as opposed to upfront for legacy license-based software models. SaaS is viewed as a superior model for software companies, their customers and investors alike compared to legacy license-based models even though the legacy model was more profitable when evaluated using current or near-term earnings. As a result, SaaS businesses are valued based on Enterprise Value/Sales (EV/Sales) and Free Cash Flow (FCF).

Med-Tech - Med-tech (or medical device) companies often exhibit high gross margins with rapid revenue growth and in many cases are taking market share or expanding existing markets. These device companies spend heavily on expanding their sales forces and growing their customer bases. They also can successfully and profitably scale their business as they grow but along the way the market values them on EV/Sales, similar to SaaS companies.

E-commerce – Internet based businesses are fast-growing businesses similar to the others above in that they are often spending heavily to drive revenue growth and capture large market opportunities. They typically are not yet profitable due to heavy investments and immature scale.

Taken together, many non-earners have been among the best performing equities in the small cap universe and overall market for years now. The increase in non-earners as a percentage of the small cap benchmark is partly a reflection of the recent cyclical economic decline but more so due to the continued emergence of several innovative high-growth industries. This dynamic is not a sign of lower quality but rather a validation of these business models. We believe the increase (and possible peak) in the percentage of unprofitable companies is not an ominous warning sign, but rather a sign consistent with the end of a recession and the beginning of a new bull market expansion.

This information is not intended to provide investment advice. Nothing herein should be construed as a solicitation, recommendation or an offer to buy, sell or hold any securities, market sectors, other investments or to adopt any investment strategy or strategies. You should assess your own investment needs based on your individual financial circumstances and investment objectives. This material is not intended to be relied upon as a forecast or research. The opinions expressed are those of Driehaus Capital Management LLC (“Driehaus”) as of July 2020 and are subject to change at any time due to changes in market or economic conditions. The information has not been updated since July 2020 and may not reflect recent market activity. The information and opinions contained in this material are derived from proprietary and non-proprietary sources deemed by Driehaus to be reliable and are not necessarily all inclusive. Driehaus does not guarantee the accuracy or completeness of this informa­tion. There is no guarantee that any forecasts made will come to pass. Reliance upon information in this material is at the sole discretion of the reader.