An Example in Precision Medicine in Cardiology

An Example in Precision Medicine in Cardiology

On May 11, 2020 the first ever randomized study in obstructive, hypertrophic cardiomyopathy had decisively positive results. The news had a clinical-stage biotech company’s shares up considerably. This is the second major win for the industry in developing precision cardiology medicines.

Cardiomyopathy represents a collection of diverse conditions of the heart muscle. These diseases have many causes, symptoms, and treatments and can affect people of all ages.1 Obstructive, hypertrophic cardiomyopathy (oHCM) is a subset of cardiomyopathies that is characterized by genetic mutations in the molecular machinery responsible for cardiac contraction, and is identifiable by a thickened, or “hypertrophic” heart muscle2,3. These thickened heart muscles have shrunken chambers that make it difficult to pump sufficient oxygenated blood to the body for normal daily functioning. Epidemiology data suggest that HCM affects one in 500 people, or roughly 600,000 patients in the US and nearly 1 million patients in Europe4,5, though the current diagnosis rate is much lower given the absence of purpose-built medicines for this condition. 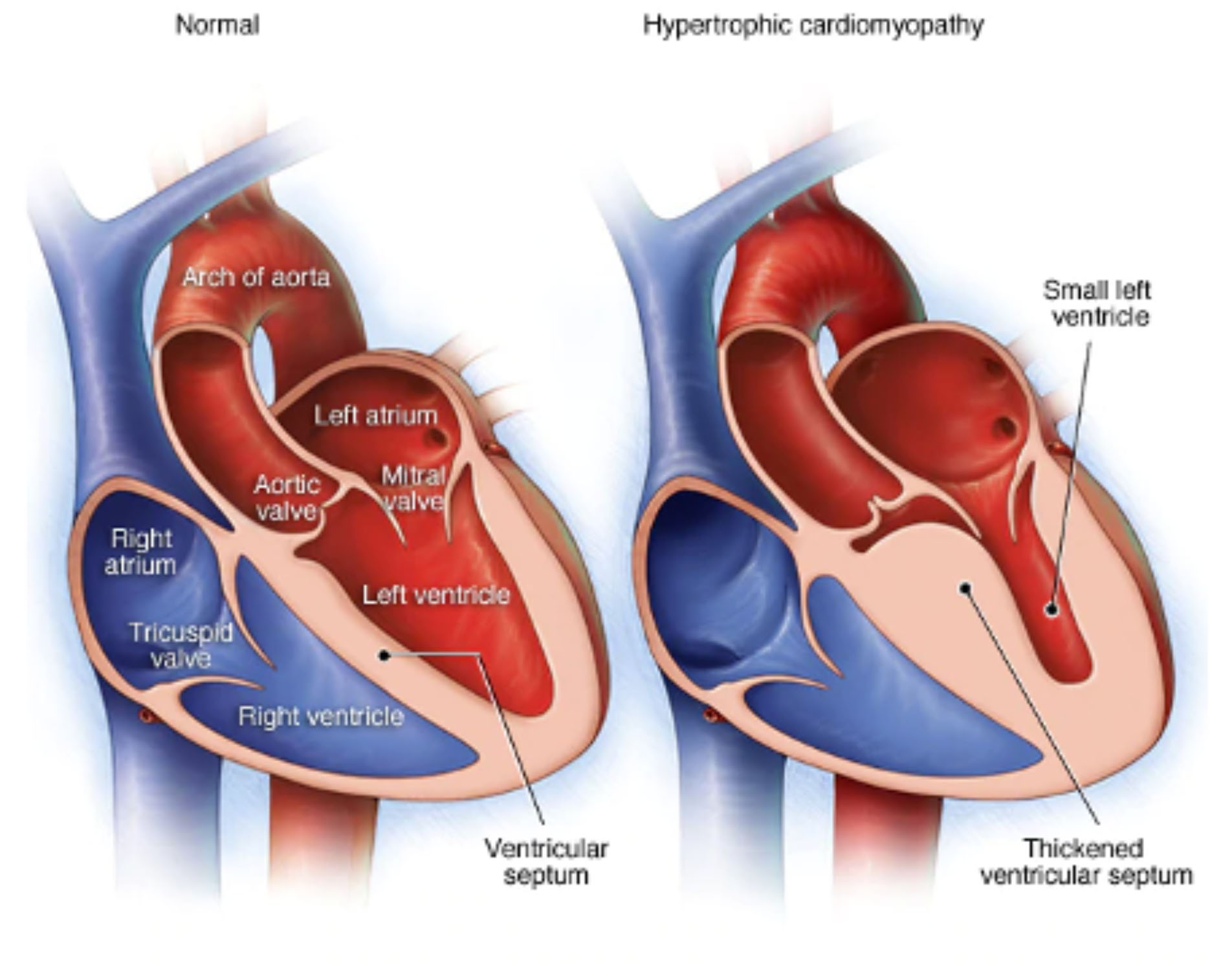 We have hypothesized that a drug that interferes with the molecular machinery that makes oHCM patients’ hearts excessively contractile (and thus “hypertrophic”) will be effective in treating the disease. On May 11th, clinical data were presented that confirmed this hypothesis. In a randomized, controlled study of oHCM patients, treatment with a selective cardiac myosin inhibitor showed statistically and clinically significant improvements in both symptoms and exercise capacity while demonstrating a strong safety profile6.

We think the addressable market opportunity for a company commercializing an effective drug in oHCM could be sizeable. The revenue opportunity is a function of number of patients on drug and drug price. On the latter, we think that multiple sclerosis (MS) offers a reasonable disease analog in terms of both prevalence and severity. MS drugs have variable pricing, but the standard of care is priced at roughly $100,000 annually, per patient7, and some drugs are much more costly. Various sources suggest that there are approximately 100,000 patients in the US diagnosed with HCM (of which two-thirds have oHCM; implying a 10% diagnosis rate), but if we use conservative assumptions on penetration (15,000 of 600,000, just in the US) and a conservative assumption on pricing ($50,000; half the price of MS), we see a very conservative addressable market opportunity in oHCM of greater than $750 million (15,000 patients * $50,000/year/patient), supporting market value in excess of $5 billion with substantial upside.

The development of any novel therapy presents two unique hurdles from an investment perspective: high failure rates and extraordinarily high upfront costs. By some estimates, it can take many hundreds of millions of dollars in capital investment and substantially more than a decade for a successful novel therapy to reach cash flow positivity. Including the costs of failed therapies and opportunity cost of capital, the all-in cost estimates balloon into the billions.

Our investment model offsets upfront costs by prioritizing therapies with both high probability of success and tight error bars around terminal value. To borrow a sports analogy, our model prioritizes batting average over slugging percentage. We developed this model over the past decade investing in and observing biotech markets. With this approach, we have been able to focus on differentiated areas of market inefficiency that others may have overlooked. Over time, we believe this approach will enable us to continue to produce strong results for our investors.

This information is not intended to provide investment advice. Nothing herein should be construed as a solicitation, recommendation or an offer to buy, sell or hold any securities, market sectors, other investments or to adopt any investment strategy or strategies. You should assess your own investment needs based on your individual financial circumstances and investment objectives. This material is not intended to be relied upon as a forecast or research. The opinions expressed are those of Driehaus Capital Management LLC (“Driehaus”) as of May 2020 and are subject to change at any time due to changes in market or economic conditions. The information has not been updated since May 2020 and may not reflect recent market activity. The information and opinions contained in this material are derived from proprietary and non-proprietary sources deemed by Driehaus to be reliable and are not necessarily all inclusive. Driehaus does not guarantee the accuracy or completeness of this informa­tion. There is no guarantee that any forecasts made will come to pass. Reliance upon information in this material is at the sole discretion of the reader.