For at least a decade we’ve been hearing about Big Pharma and its barren pipelines. This has been repeatedly cited as a reason for why Big Pharma might go shopping for development-stage biotech companies. However, a quick review back through 2009 shows that despite post-recession bargain prices for development-stage assets, the majority of M&A pharmaceutical transactions involved commercial assets (Exhibit 1).

Our analysis is not perfect but does provide a close approximation. We screened FactSet for closed or pending transactions in which the deal value was more than $100 million, and we defined development-stage by the absence of product revenue, which means we manually removed some transactions. That being said, we think the adjustments allow for an accurate representation of the data.

Exhibit 2: Number of M&A deals of more and less than $1 billion, by year 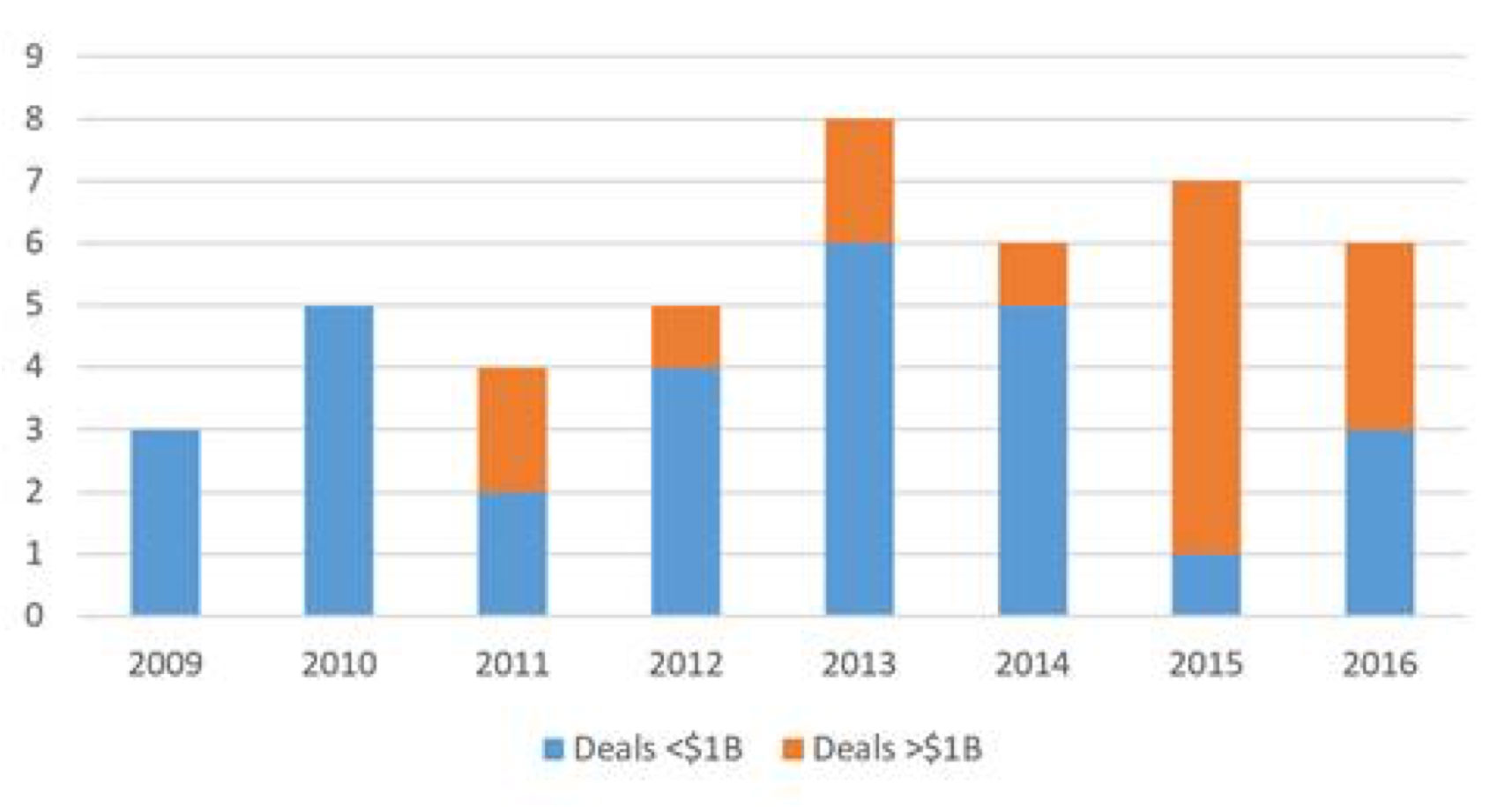 In 2015 there was just a single transaction of a development-stage company with a deal value of less than $1 billion. This year, there have been three such deals that all occurred recently and within three weeks of each other, which is what sparked our interest to investigate the data. In other words, from January 1, 2015 through August 30, 2016 there was only one development-stage deal. Then from August 31 through September 14, 2016, there were three separate deals that were announced in rapid succession.

It is hard to suggest that this activity will continue, but three transactions does make a trend. There is increasing rhetoric from industry observers that the large therapeutics companies must replenish their pipelines. And just like the last time we heard this rhetoric, industry balance sheets are flush with cash. Unlike last time, visibility on revenue, margins and cash flow is much better because the assets will be used to supplement growth, as opposed to filling the holes left in the P&L by expired patents.

Whether the trend is real or not, we will continue to look for companies that are well positioned with differentiated assets and an ability to scale up. While M&A would likely be a positive development, it is rarely the reason we own a company.

This information is not intended to provide investment advice. Nothing herein should be construed as a solicitation, recommendation or an offer to buy, sell or hold any securities, market sectors, other investments or to adopt any investment strategy or strategies. You should assess your own investment needs based on your individual financial circumstances and investment objectives. This material is not intended to be relied upon as a forecast or research. The opinions expressed are those of Driehaus Capital Management LLC (“Driehaus”) as of October 2016 and are subject to change at any time due to changes in market or economic conditions. The information has not been updated since October 2016 and may not reflect recent market activity. The information and opinions contained in this material are derived from proprietary and non-proprietary sources deemed by Driehaus to be reliable and are not necessarily all inclusive. Driehaus does not guarantee the accuracy or completeness of this informa­tion. There is no guarantee that any forecasts made will come to pass. Reliance upon information in this material is at the sole discretion of the reader.