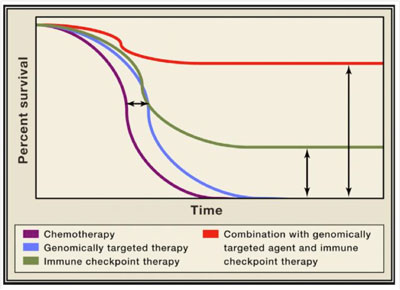 Investors are enthusiastic about CAR-T, understandably
CAR-T stands for chimeric antigen receptor T-cell, and the deployment of CAR-T therapy is even more complex than the name. A patient’s T-cells, or immune cells, are extracted and modified to generate proteins that cause the T-cells to explicitly target cancer cells. When a T-cell engages with a cancer cell, it kills it. One of the advantages of CAR-T therapy is that the engineered cells replicate and persistently scout for tumor cells. This persistent monitoring has produced durable remissions in patients who had failed many lines of treatment.

The efficacy of CAR-T has been undeniably strong, however there are disadvantages as well. Because of CAR-T’s persistence, toxicities that emerge during treatment may not go away. This is in contrast to something like chemotherapy, which can be withdrawn if harsh side-effects emerge. From a commercial perspective, another disadvantage is that the therapy must be tailored to each individual patient and thus is time consuming and lacks meaningful scalability.

We really like bispecific antibodies
Bispecifc antibodies attempt to accomplish the same outcome as CAR-T: They bring T-cells directly to cancer cells where they can then attack and kill the cancer cells. These antibodies are “bispecific” because they are molecules that simultaneously engage two different targets. While they can be deployed in various ways, two clear targets for simultaneous engagement are tumor cells and T-cells, thus replicating the effect of CAR-T.

What makes bispecific antibodies particularly promising, by our assessment, is that they can be mass produced because they lack the need for customization. And while they also lack the persistence that creates a side-effect liability for CAR-T, they can be repeat-administered to produce the persistence effect of CAR-T. In our portfolios, we have invested in several promising companies that are developing bispecific antibody programs.

It’s all a step forward
While these immunotherapies have been in development for decades, their recent wave of success has produced some truly remarkable results. There are many modalities with advantages and disadvantages for each, but the hope is that the success of these immunotherapies may meaningfully prolong survival while reducing the toxicities often associated with cancer treatment. Chemotherapy probably is not going away, but to the extent that its use can be diminished, everybody wins.

This information is not intended to provide investment advice. Nothing herein should be construed as a solicitation, recommendation or an offer to buy, sell or hold any securities, market sectors, other investments or to adopt any investment strategy or strategies. You should assess your own investment needs based on your individual financial circumstances and investment objectives. This material is not intended to be relied upon as a forecast or research. The opinions expressed are those of Driehaus Capital Management LLC (“Driehaus”) as of June 2015 and are subject to change at any time due to changes in market or economic conditions. The information has not been updated since June 2015 and may not reflect recent market activity. The information and opinions contained in this material are derived from proprietary and non-proprietary sources deemed by Driehaus to be reliable and are not necessarily all inclusive. Driehaus does not guarantee the accuracy or completeness of this informa­tion. There is no guarantee that any forecasts made will come to pass. Reliance upon information in this material is at the sole discretion of the reader.