China’s slowdown is nothing new for investors, and the market seems to accept the “L-Shaped” growth story. However, the most recent money supply and credit data from the People’s Bank of China (PBoC) has raised new concerns about the ongoing adjustment process in the world’s second largest economy.

The money supply metric M1 is defined in China as the sum of currency in circulation and corporate demand deposits. Historically, growth in M1 has been highly correlated with GDP growth, leading many to use it as an indicator of China’s economic health. However, since mid-2015 the two metrics have diverged meaningfully (Exhibit 1).

Exhibit 1: Until recently, the rate of growth of M1 and China GDP were highly correlated 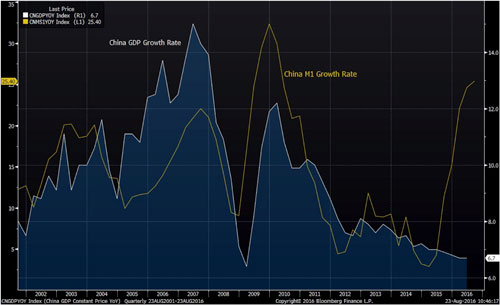 Over the same period, a similar divergence arose between M1 growth and the broader M2 growth, which includes saving deposits from corporates, the government and individuals. This is the most extreme instance of divergence between these series in the past two decades (Exhibit 2).

Exhibit 2: Why the recent divergence in China’s M1 and M2 growth? 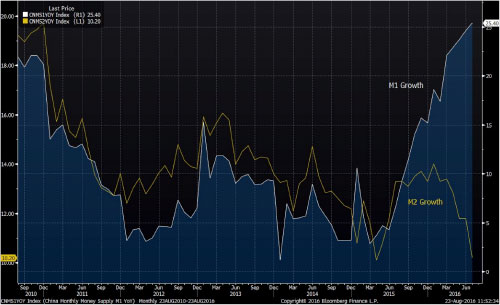 Three possible reasons may explain the unusual concurrence of a surge in M1 with slowing growth of both GDP and M2.

China’s monetary mystery is one manifestation of the unprecedented difficulties the country faces as it looks to shift its economy from investment to consumption driven. Namely, the value of previously reliable economic indicators and levers is eroding at a time when the property market is fevered, leverage is elevated, and both manufacturing investment and consumption are sluggish. Monetary policy, for its part, seems to have diminished in effectiveness, and China’s ability to adopt multiple approaches to push forward structural reforms while maintaining short-term growth must be monitored carefully.

This information is not intended to provide investment advice. Nothing herein should be construed as a solicitation, recommendation or an offer to buy, sell or hold any securities, market sectors, other investments or to adopt any investment strategy or strategies. You should assess your own investment needs based on your individual financial circumstances and investment objectives. This material is not intended to be relied upon as a forecast or research. The opinions expressed are those of Driehaus Capital Management LLC (“Driehaus”) as of September 2016 and are subject to change at any time due to changes in market or economic conditions. The information has not been updated since September 2016 and may not reflect recent market activity. The information and opinions contained in this material are derived from proprietary and non-proprietary sources deemed by Driehaus to be reliable and are not necessarily all inclusive. Driehaus does not guarantee the accuracy or completeness of this informa­tion. There is no guarantee that any forecasts made will come to pass. Reliance upon information in this material is at the sole discretion of the reader.

James Woods is a senior analyst on the Emerging Markets Team with a focus on the materials, energy and industrials sectors in addition to frontier markets.