Following a surge of investment-driven growth in the wake of the global financial crisis, we are now witnessing a transitional phase in China’s economic growth model. Specifically, Chinese leadership is seeking to slow the growth rate of fixed asset investment, as infrastructure spending is proving to be increasingly less productive, while aiming to simultaneously increase consumption as a percentage of GDP. This strategy implies not only a downshift in the trajectory of the country’s GDP growth, but also a change in its growth composition.

Large state-owned enterprises (SOEs) that have historically dominated China’s cyclical industries should play an increasingly smaller role in the economy. SOEs are generally inefficient users of capital—something the government is explicitly targeting—that are currently plagued by excess capacity and shrinking profit margins. The government prefers to support more dynamic and innovative private companies, which seek to maximize profits and efficiently allocate capital. This is consistent with the leadership’s goal of rebalancing the Chinese growth model away from state-funded or affiliated companies.

Private companies realize higher productivity on their investments. Having more of China's capital allocated by private companies should help the government achieve its goal of a healthier and more efficient economy. The difference in business approach and operating structure between private companies and SOEs is apparent in the former’s superior profitability and earnings growth, and theoretically superior stock performance. 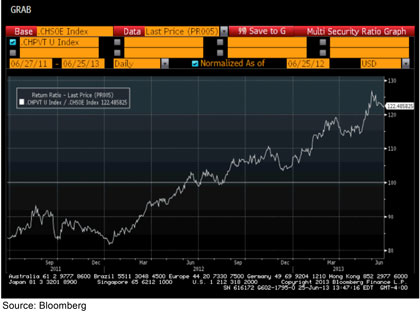 The Driehaus Emerging Markets Team continues to focus on businesses with superior and sustainable growth models, such as select private Chinese corporations.

This information is not intended to provide investment advice. Nothing herein should be construed as a solicitation, recommendation or an offer to buy, sell or hold any securities, market sectors, other investments or to adopt any investment strategy or strategies. You should assess your own investment needs based on your individual financial circumstances and investment objectives. This material is not intended to be relied upon as a forecast or research. The opinions expressed are those of Driehaus Capital Management LLC (“Driehaus”) as of June 2013 and are subject to change at any time due to changes in market or economic conditions. The information has not been updated since June 2013 and may not reflect recent market activity. The information and opinions contained in this material are derived from proprietary and non-proprietary sources deemed by Driehaus to be reliable and are not necessarily all inclusive. Driehaus does not guarantee the accuracy or completeness of this informa­tion. There is no guarantee that any forecasts made will come to pass. Reliance upon information in this material is at the sole discretion of the reader.