Recently, we discussed the global shift toward renewable energy from an emerging markets perspective, outlining several sources of growth across countries as technologies such as solar, wind, hydrogen, and electric vehicles (EV) become increasingly competitive with fossil fuels.

Since we published our last piece, there have been two key developments that underscore the potential for emerging market countries, namely China, to take a leadership role in the global energy transition.

First, China’s President Xi Jinping made a commitment at the United Nations for China to become carbon neutral by 2060. While this is a long way off, the plan also calls for a peak in carbon emissions by 2030, and the announcement serves as a symbol ahead of China’s 14th Five Year Plan, which is set to be unveiled in October and reinforces China’s commitment to developing a cleaner energy mix.

Second, Tesla’s long-awaited “Battery Day” revealed aspirations of dramatic cost reductions, as the company announced that it would reduce battery costs per kilowatt-hour (kWh) by 56% over the next three years, with plans to expand production to 20 million vehicles per year longer-term. Tesla aims to produce an EV priced at $25,000, and the company foresees a rapid expansion of the energy storage device market.

Connecting the dots between these ambitious announcements, we see a clear commitment to energy transition, which will only be brought about through scalability and cost reduction of leading technologies, and supported by mass adoption.

As with any major announcement, one must scrutinize the details and be mindful of the potential for timeline slippages and cost overruns. Accordingly, we examine some of the necessary components to achieve these objectives, along with the areas of opportunity from an investment standpoint.

The Intergovernmental Panel on Climate Change (IPCC) indicates that all coal-fired power capacity would need to be shut by 2050 in order to avoid a 1.5°C temperature rise and put the world on a path to carbon neutrality by 2050. This would amount to one-third of the world’s power capacity. Considering the low cost, high degree of scalability, and short life of existing coal-fired power resources in Asia, this target may prove difficult to achieve (Exhibit 1). However, it also points to a potential acceleration in renewable power capacity addition as the inevitable handoff from thermal to renewable occurs.

Compared to other emerging market countries, China is further along in the development of renewable energy technologies. As shown below, the levelized cost of energy (LCOE) for wind and solar is competitive today with fossil fuels (Exhibit 2). 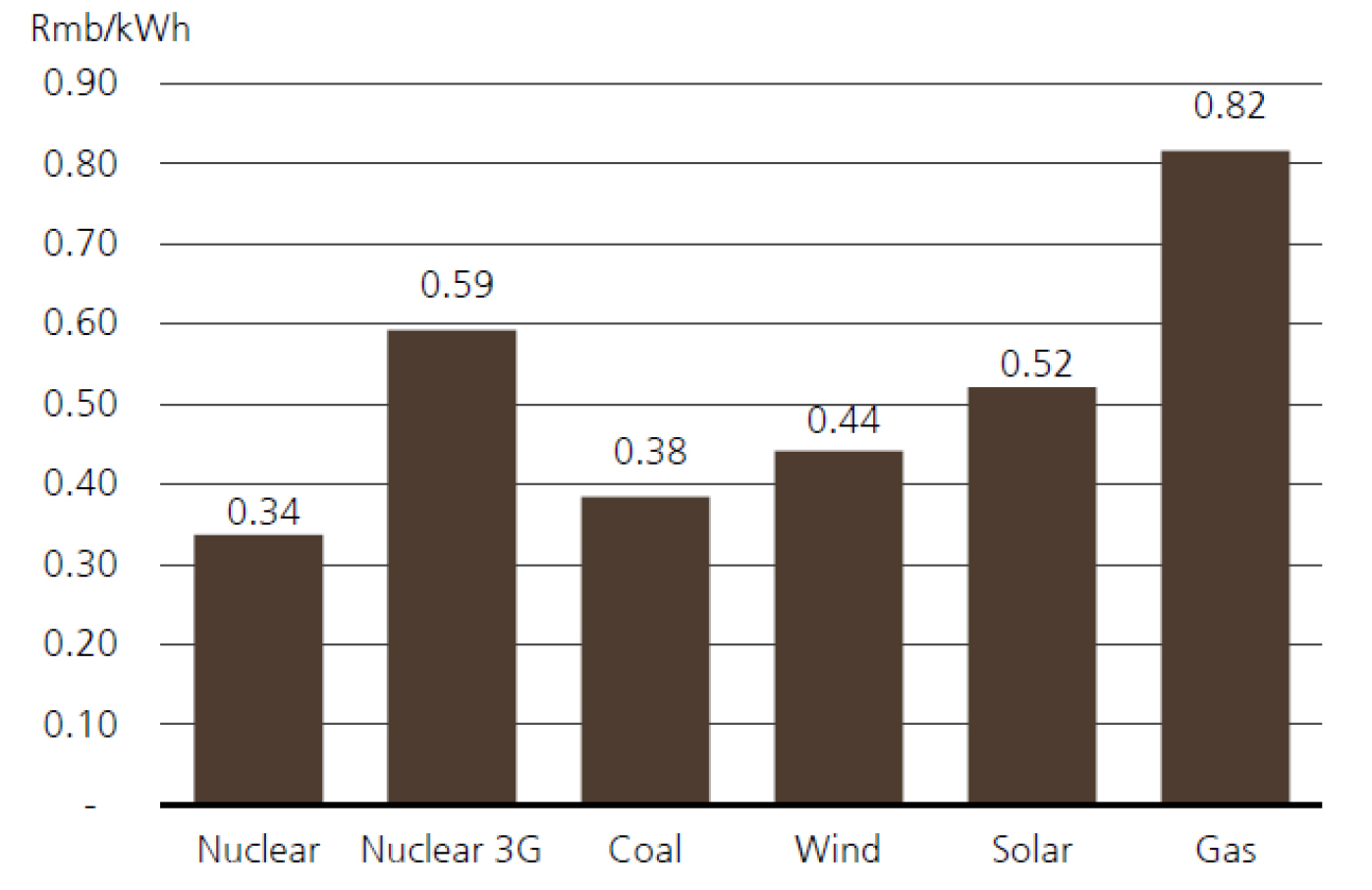 While increasingly competitive from a cost standpoint, the main drawback of solar and wind power is that their output fluctuates, and curtailment can leave the power grid vulnerable during times of heightened demand that is unable to be matched by supply.

For example, solar’s output load may range between 70-90% during the day, but zero at night. Conversely, wind may reach a load of 60-100% at night but 10-20% during the day. As shown below, China has made considerable progress reducing curtailment, but this can vary from a regional perspective within the country (Exhibit 3). 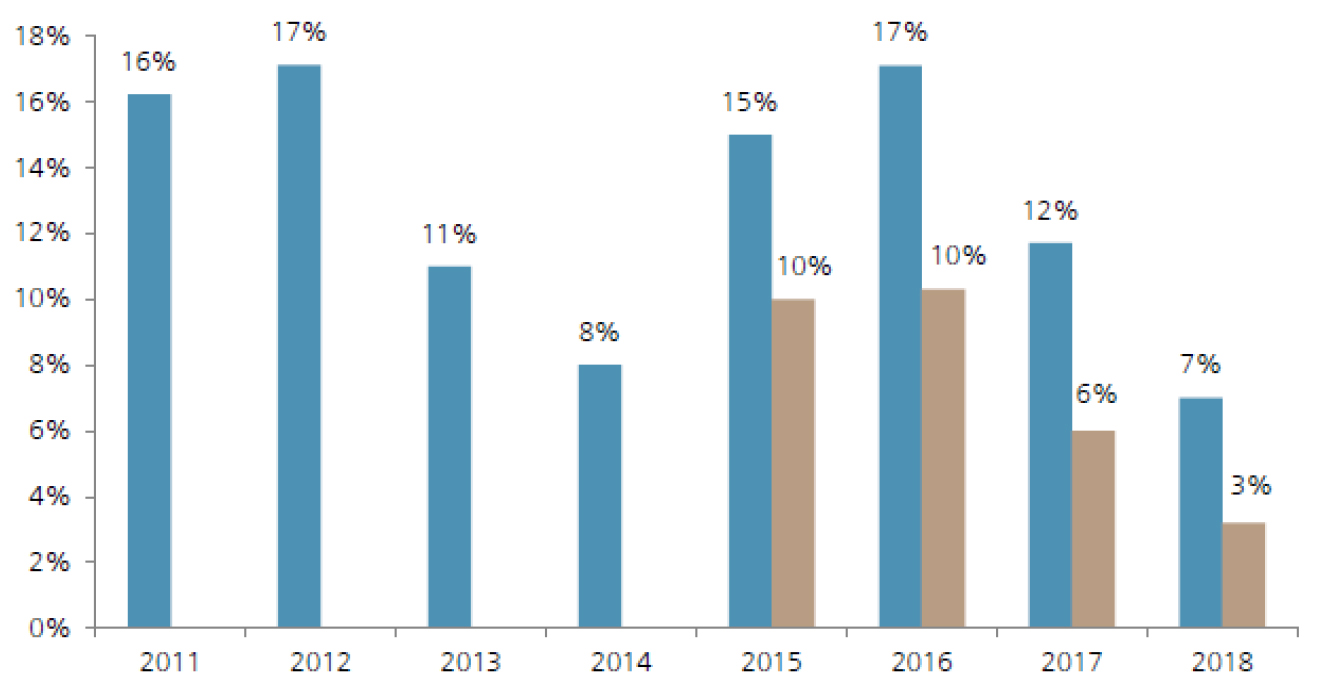 Consequently, energy storage, which is limited in scope today as a percentage of global power generation capacity, will inevitably become a more important piece of the puzzle, if countries such as China are to deliver on their renewable energy ambitions. According to UBS, at the end of 2018, the installed energy storage system was 188GW, which was only 2.5% of the global installed power generation capacity.

In tandem with Tesla’s push to reduce battery costs and achieve economies of scale, we expect to see rising research and development spending being devoted to energy storage. Similar to the cost reduction profile we have observed in renewable energy over time, we expect that technological advances will improve the cost and efficiency of energy storage systems.

We see a robust opportunity set for investors across the renewable energy industry, with a focus on technology leaders and scalability. Such opportunities have recently included areas such as advanced material producers for onshore wind turbines, manufacturers of offshore wind infrastructure, and battery cell producers.

Going forward, we expect more countries in both the emerging and developed world to adopt policies that are favorable for renewable energy, while devoting an increasing amount of research and development expenditures toward the development of tomorrow’s leading technologies in the industry. This increasing focus will further reduce costs throughout the industry and enhance the appeal of renewable energy as major countries around the world seek to deliver on ambitious plans to mitigate the risks associated with climate change.

This information is not intended to provide investment advice. Nothing herein should be construed as a solicitation, recommendation or an offer to buy, sell or hold any securities, market sectors, other investments or to adopt any investment strategy or strategies. You should assess your own investment needs based on your individual financial circumstances and investment objectives. This material is not intended to be relied upon as a forecast or research. The opinions expressed are those of Driehaus Capital Management LLC (“Driehaus”) as of September 2020 and are subject to change at any time due to changes in market or economic conditions. The information has not been updated since September 2020 and may not reflect recent market activity. The information and opinions contained in this material are derived from proprietary and non-proprietary sources deemed by Driehaus to be reliable and are not necessarily all inclusive. Driehaus does not guarantee the accuracy or completeness of this informa­tion. There is no guarantee that any forecasts made will come to pass. Reliance upon information in this material is at the sole discretion of the reader.