China’s relevance to the global market stage has never been more prominent than it is today. In addition to having an ever-increasing share of global growth and playing a growing role in steering globalization, the country is also undergoing important internal cyclical and structural changes. Many of these changes have been on display in previous weeks as the 19th Communist Party Congress took place, the country played host to the American president, and the market focused more on whether the Chinese economy will perform as well in 2018 as it has this year.

October brought us the highly-anticipated Communist Party Congress, which occurs just once every five years. The weeklong event brings highly scrutinized public addresses, consideration of policy changes, and most importantly, elects a new Standing Committee. For China-watchers, it was no surprise that a main conclusion from the event was even further consolidation of power around President Xi Jinping. However, the degree to which his grip was strengthened came as a surprise. No successor was appointed, suggesting that Xi intends to serve more than the typical two five-year terms as leader. His name and philosophy, “the Xi Jinping Thought for the New Era of Socialism with Chinese Special Characteristics” were added to the constitution alongside the contributions made by Deng Xiaoping and Mao Zedong, a truly unprecedented step and one intended to bolster the cult of personality surrounding the leader while he is in power. With this unprecedented consolidation of power, Xi is shifting economic strategy of the Chinese state to a more longer-term one with more overt concern for financial stability. He wishes to de-emphasize numeric goals and transition to a higher-quality, more developed economy that will “generate growth with quality, efficiency and dynamism.” While this may sound like political flourishes to some, it is quite relevant to the outlook in China.

Since the start of 2017, we have seen supply side cuts in heavily-polluting industries, deleveraging across non-traditional financial channels, higher regulation and restriction of the so called “shadow financing” sector, alongside tightening measures in most top-tier housing markets. We expect a continuation of these reform efforts but do not expect a marked acceleration in the year to come given that efforts are already having visible impact on total credit growth and the housing market. The biggest question heading into 2018 is whether the old relationships still hold, where monetary tightening always leads to a material slowdown in economic activity. Thus far, we haven’t seen the same level of slowdown that normally would have transpired, not because the structure of the Chinese economy has changed, but because the external sector and government spending have compensated. We still expect these efforts to result in a more noticeable slowdown in the coming months, but if 2018 turns out to be more challenging, we expect the Chinese state to pull back from these overly restrictive efforts. It will be a balancing act but given the experience of past mistakes, we believe there is limited chance the Chinese government will tolerate a pronounced slowdown despite the dawning of Xi’s supposed ‘New Era.’

The Economy Accelerated While Credit Growth Slowed in 2017 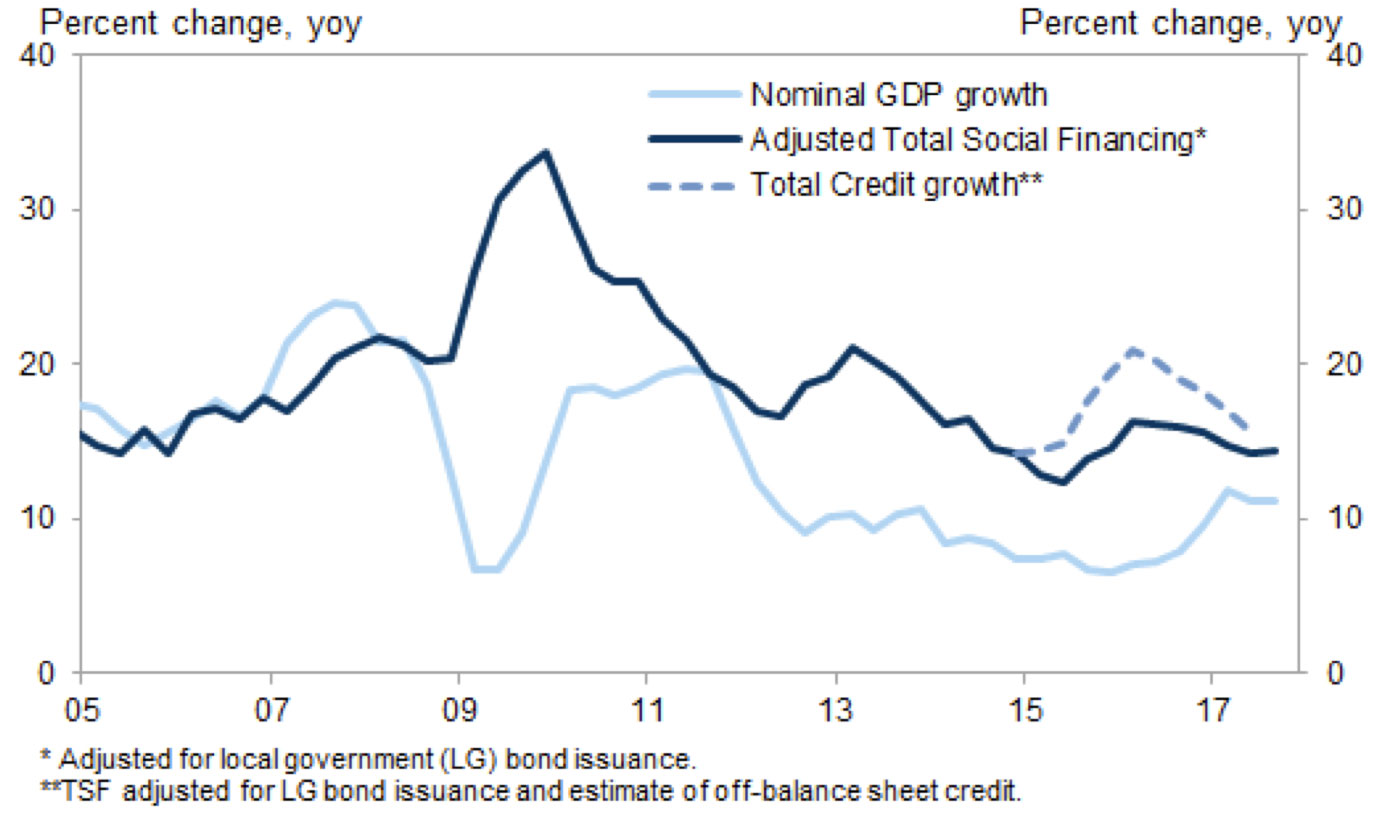 This information is not intended to provide investment advice. Nothing herein should be construed as a solicitation, recommendation or an offer to buy, sell or hold any securities, market sectors, other investments or to adopt any investment strategy or strategies. You should assess your own investment needs based on your individual financial circumstances and investment objectives. This material is not intended to be relied upon as a forecast or research. The opinions expressed are those of Driehaus Capital Management LLC (“Driehaus”) as of November 2017 and are subject to change at any time due to changes in market or economic conditions. The information has not been updated since November 2017 and may not reflect recent market activity. The information and opinions contained in this material are derived from proprietary and non-proprietary sources deemed by Driehaus to be reliable and are not necessarily all inclusive. Driehaus does not guarantee the accuracy or completeness of this informa­tion. There is no guarantee that any forecasts made will come to pass. Reliance upon information in this material is at the sole discretion of the reader.