The rise of smartphones over the last decade has generated massive profits for the technology industry. China has been the biggest growth driver for smartphone manufacturers over the past few years as smartphone penetration rapidly increased. While China’s rapid adoption of smartphones boosted supply chain companies to unprecedented profits, growth is now slowing as penetration approaches 70%, roughly the level seen in developed markets (Exhibit 1).

India is often cited as the next growth driver given its massive population and low smartphone penetration levels. However, we are skeptical that it can provide as big of a tailwind to the smartphone supply chain as China. There are a few key differences between the two markets that suggest India will not grow as rapidly. First, income levels are still much lower in India today compared to when smartphone penetration was at a similar level in China in 2012. GDP per capita in China then was already over two times that of India’s current GDP per capita (Exhibit 2). This massive discrepancy suggests Indian consumers have significantly less money to spend on smartphones. 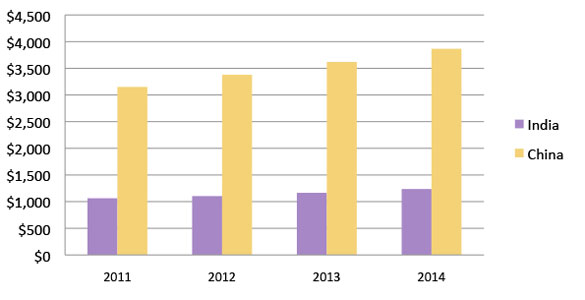 Second, until recently Chinese telecom companies subsidized a large portion of the cost of smartphones. India does not have carrier subsidies, which substantially increases the upfront cost to consumers.

Finally, China has a high number of smartphone vendors, which makes the market extremely competitive (i.e., affordable for the consumer). While India is still competitive, there are significantly fewer players, which could mean less aggressive price competition as the market grows. We may see higher levels of industry profitability as a result, but this also could act as a drag on the smartphone adoption rate.

India remains an attractive market but its growth trajectory and ability to support the smartphone supply chain will be different than China’s. This has important ramifications for the supply chain. Growth will be structurally lower in the future, which will make industry conditions significantly more challenging. Therefore, we believe it is critical to find stocks with idiosyncratic growth drivers, such as companies that are gaining market share from peers or that can supply an increasing amount of content per device.

This information is not intended to provide investment advice. Nothing herein should be construed as a solicitation, recommendation or an offer to buy, sell or hold any securities, market sectors, other investments or to adopt any investment strategy or strategies. You should assess your own investment needs based on your individual financial circumstances and investment objectives. This material is not intended to be relied upon as a forecast or research. The opinions expressed are those of Driehaus Capital Management LLC (“Driehaus”) as of October 2015 and are subject to change at any time due to changes in market or economic conditions. The information has not been updated since October 2015 and may not reflect recent market activity. The information and opinions contained in this material are derived from proprietary and non-proprietary sources deemed by Driehaus to be reliable and are not necessarily all inclusive. Driehaus does not guarantee the accuracy or completeness of this informa­tion. There is no guarantee that any forecasts made will come to pass. Reliance upon information in this material is at the sole discretion of the reader.

Thomas Ansen-Wilson is a senior analyst on the Emerging Markets Team with a focus on information technology and communication services sectors.