As China’s overall GDP growth rate slows as a result of the country’s transition from an investment-driven growth model, the health care sector remains a bright spot. The sector’s growth potential is obvious from looking at China’s per capita health care expenditures, which is one-third of the global average and massively lower than that of developed countries. 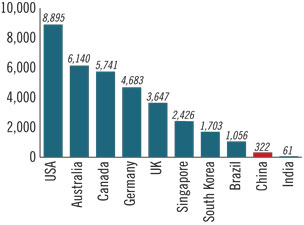 The sector’s potential is being unleashed by multiple factors, including demographic change, rising incomes and improving insurance coverage. The government is playing a key role, having now extended basic medical insurance coverage to 99% of the population. That said, there is still immense potential for investors as government health care spending remains well below the global average, and 80% of the insured population receives an annual government subsidy of only $50.

As the government attempts to move to a more consumption-driven economy, strengthening the social safety net and reducing out-of-pocket health care expenditures will remain a key focus. Overall, China health care spending is expected to grow at a mid-teens annual rate over the coming years. We anticipate the exchange-listed health care companies will grow even faster, aided by consolidation of an extremely fragmented industry. (For example, the top 10 Chinese drug manufacturers hold a combined 15% market share compared to over 40% cumulative market share for the top 10 global drug producers.) 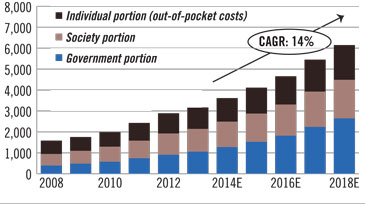 While most of our investments to date have been concentrated in pharmaceutical production and distribution, over time we see more opportunities emerging within health care services as the government gradually liberalizes the industry and encourages more private investment.

This information is not intended to provide investment advice. Nothing herein should be construed as a solicitation, recommendation or an offer to buy, sell or hold any securities, market sectors, other investments or to adopt any investment strategy or strategies. You should assess your own investment needs based on your individual financial circumstances and investment objectives. This material is not intended to be relied upon as a forecast or research. The opinions expressed are those of Driehaus Capital Management LLC (“Driehaus”) as of January 2015 and are subject to change at any time due to changes in market or economic conditions. The information has not been updated since January 2015 and may not reflect recent market activity. The information and opinions contained in this material are derived from proprietary and non-proprietary sources deemed by Driehaus to be reliable and are not necessarily all inclusive. Driehaus does not guarantee the accuracy or completeness of this informa­tion. There is no guarantee that any forecasts made will come to pass. Reliance upon information in this material is at the sole discretion of the reader.