The Chinese Financial System and the Need for Reform

The Chinese Financial System and the Need for Reform

While much attention has been focused on the recent far-reaching Chinese reform initiatives unveiled at the government plenum in November, market participants are beginning to notice the rapid changes occurring among Chinese credit markets. After the well documented spike in interbank rates in October, we have yet to see a resettling of market conditions (Exhibit 1). Similarly and perhaps more alarming, longer-dated Chinese treasury and corporate bond yields are now ascending to new highs (Exhibit 2). China’s current 10-year treasury yield of 4.7% marks the highest rate seen in eight years. 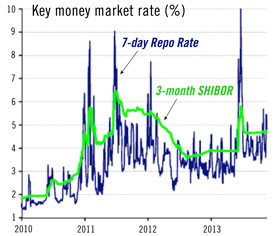 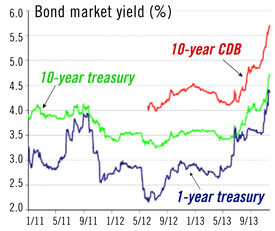 Although Chinese inflation has risen in recent months alongside improving growth conditions, the coinciding increase in bond yields has been far greater than in similar instances witnessed during prior periods of inflation or improving growth. During a trip to Beijing in mid-November, we concluded that the People’s Bank of China is growing more comfortable with a tighter liquidity environment. In our view, this is because:

The third point is quite important in light of the fervor surrounding interbank/shadow lending. The tightening of interbank activity is now more aggressively transmitted into the “real economy” as a result of the complex network of shadow transactions that rely on interbank activities.

Traditionally, banks allocated their assets between loans (on their balance sheets) and bonds. This means that when the lending quota was tight and interbank liquidity tightened only modestly in the past, the bond market would not been affected so strongly. However, with the recent rapid development of off-balance sheet credit, banks can and are increasingly allocating liquidity to a third asset class – interbank asset or other non-bond securitized assets, which can provide higher returns than bonds. Consequently, the recent uptick in interbank rates likely strengthened the incentive for banks to seek higher yields in the (non-standard) credit market and shy away from the formal bond market.

We believe this means:

For the present, 76% of credit in China is still channeled via loans. This implies that the majority of credit in the system is still priced around benchmark lending rates, which remain much more stable. However the parallel systems of formal and informal lending amplify the risk of credit and liquidity volatility increasing haphazardly in forthcoming years. As part of its reform agenda, the government understands the need to contain the interbank/informal lending market. However, doing so entails significant risks, including the unintended consequences of financial innovation/liberalization as well as the potential for intermittent, unpredictable liquidity squeezes and elevated volatility.

This information is not intended to provide investment advice. Nothing herein should be construed as a solicitation, recommendation or an offer to buy, sell or hold any securities, market sectors, other investments or to adopt any investment strategy or strategies. You should assess your own investment needs based on your individual financial circumstances and investment objectives. This material is not intended to be relied upon as a forecast or research. The opinions expressed are those of Driehaus Capital Management LLC (“Driehaus”) as of November 2013 and are subject to change at any time due to changes in market or economic conditions. The information has not been updated since November 2013 and may not reflect recent market activity. The information and opinions contained in this material are derived from proprietary and non-proprietary sources deemed by Driehaus to be reliable and are not necessarily all inclusive. Driehaus does not guarantee the accuracy or completeness of this informa­tion. There is no guarantee that any forecasts made will come to pass. Reliance upon information in this material is at the sole discretion of the reader.