The Detrimental Effect of Ecommerce

The Detrimental Effect of Ecommerce

Nearly every publicly traded bricks-and-mortar retailer over the last several years has made investments in an omnichannel presence—making products available for purchase in store, online and mobile channels. While such investments are frequently encouraged by investors, and management teams often tout growth in online sales, the track record of many companies indicates ecommerce investments and the shift to online sales are quite detrimental to earnings. While they may be necessary evils to avoid market share loss, margins and earnings have consistently suffered well beyond the expenses related to the initial buildout of ecommerce capabilities. 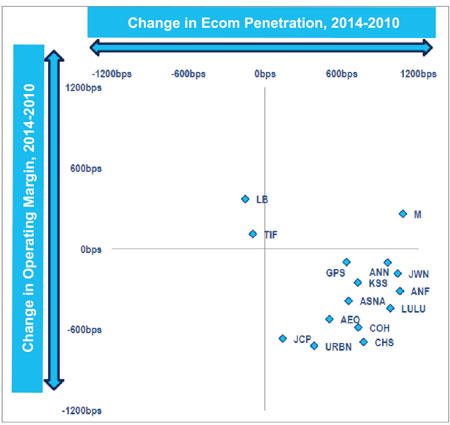 Exhibit 1 illustrates how, even in the midst of a solid economic environment, most retailers in the specialty and department store sectors over the last five years have seen operating margins decline while ecommerce penetration has risen. Of the two that had a decline in ecommerce penetration, both saw margins improve.

One of the best examples of the detrimental effect of a rising mix of online sales for a bricks-and-mortar retailer is that of a national brand that specializes in imported home furnishings and decor. Its ecommerce capabilities were launched in August 2012 (the middle of its 2013 fiscal year) with the hope that existing customers would spend more while new customers would discover the brand. Management expected operating margins in the two channels would be equivalent over time as the incremental expense of online fulfillment and shipping would be offset by a lack of occupancy costs.

An examination of actual results shows several interesting trends (Exhibit 2). Total sales and same store sales—two key metrics for any retailer—were solid after launching the website and the company’s new ecommerce capabilities produced $206 million in sales, which offset the $22 million decline in store sales. On the surface, strong same store sales and a relative lack of cannibalization should have been a good thing. However, the effect on margins was quite detrimental with a 500 basis point decline in operating margins in the two full years after the debut of its ecommerce channel.

This begs the question of why an increased mix of ecommerce sales weighs so heavily on margins. While every retailer is different, it is intuitive that when a sale that would have occurred in a store moves online, the leverage that would have occurred on rent and store labor expense is lost, while shipping and handling expenses and the higher rate of online product returns is added. In effect, retailers are trading sales from a channel that has relatively fixed expenses to one that has more variable costs, which results in margin pressure. Online sales are also subject to increased price transparency and competition from scale-based low-margin operators such as Amazon. Even in the preceding example, where ecommerce sales appear to have been mostly incremental, the scale required to overcome lower merchandise margins is far too high to avoid meaningful margin pressure.

Interestingly enough, there is a nascent trend of online operators such as Amazon, Blue Nile, Bonobos and Duluth Holdings, experimenting more with physical stores to complement their online presence. Perhaps they hope to see the opposite effect on margins as they encroach on their bricks-and-mortar competitors.

This information is not intended to provide investment advice. Nothing herein should be construed as a solicitation, recommendation or an offer to buy, sell or hold any securities, market sectors, other investments or to adopt any investment strategy or strategies. You should assess your own investment needs based on your individual financial circumstances and investment objectives. This material is not intended to be relied upon as a forecast or research. The opinions expressed are those of Driehaus Capital Management LLC (“Driehaus”) as of January 2016 and are subject to change at any time due to changes in market or economic conditions. The information has not been updated since January 2016 and may not reflect recent market activity. The information and opinions contained in this material are derived from proprietary and non-proprietary sources deemed by Driehaus to be reliable and are not necessarily all inclusive. Driehaus does not guarantee the accuracy or completeness of this informa­tion. There is no guarantee that any forecasts made will come to pass. Reliance upon information in this material is at the sole discretion of the reader.