Indian equities exemplify the expensive quality trade within emerging markets over the past couple of years. Despite high expectations, Indian companies have failed to generate persuasive improvements in their capital expenditures/sales ratio or in asset utilization. As a result, investors have pushed multiples for many Indian equities higher in spite of muted tangible improvement in corporate profits. Exhibit 1 illustrates the aggressive implied growth rate being factored into the India story. In contrast, Chinese assumptions remain fairly tepid and more realistic. 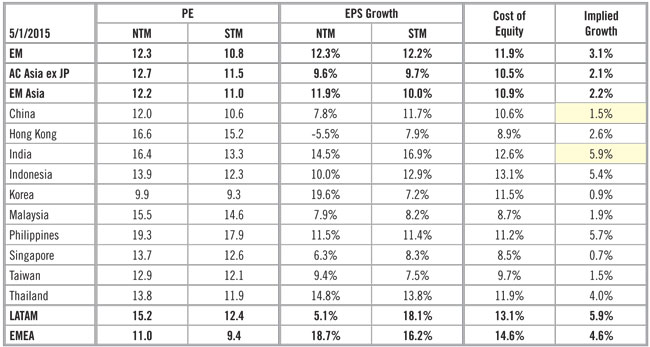 According to Bloomberg data, India remains a consensus overweight among EM portfolio managers, while nearly 40% of US-domiciled EM funds are at least 50% underweight China. Despite its dramatic rally, investor interest in Chinese equities appears to have only started to grow, as suggested by the recent uptick in share creation of the iShares China Large-Cap Index.

Investors must remain aware of the potential effect of unraveling “herd trades” in emerging markets and other asset classes. With plenty of liquidity and low volatility, many investors have been lulled into a false sense of complacency, but the golden period of weak growth and ample liquidity may be drawing to a close. Investors with aggressive allocations to expensive higher-quality growth companies may find themselves facing pain-trade scenarios, such as in the autumn of 2014 when investors were similarly left choosing between China and India.

This information is not intended to provide investment advice. Nothing herein should be construed as a solicitation, recommendation or an offer to buy, sell or hold any securities, market sectors, other investments or to adopt any investment strategy or strategies. You should assess your own investment needs based on your individual financial circumstances and investment objectives. This material is not intended to be relied upon as a forecast or research. The opinions expressed are those of Driehaus Capital Management LLC (“Driehaus”) as of June 2015 and are subject to change at any time due to changes in market or economic conditions. The information has not been updated since June 2015 and may not reflect recent market activity. The information and opinions contained in this material are derived from proprietary and non-proprietary sources deemed by Driehaus to be reliable and are not necessarily all inclusive. Driehaus does not guarantee the accuracy or completeness of this informa­tion. There is no guarantee that any forecasts made will come to pass. Reliance upon information in this material is at the sole discretion of the reader.