The Tale of Two Markets

The Tale of Two Markets

The rally in emerging markets (EM) can be best described as the Tale of Two Markets. On the one hand, there are the Asia Pacific/Central and Eastern Europe regions, which have been supported by high growth, accelerating trade volumes and expanding current account surpluses. On the other hand, the story is a little less straightforward. Several nations are emerging from bouts of political turmoil and hyperinflation, which has kept money away for years. Thankfully, this tale has a happy ending.

High yield nations such as India, Brazil, Russia, Chile, Colombia, and Indonesia have performed well due to the rapid disinflation boom (as opposed to economic acceleration). (Exhibit 1) This disinflationary force was driven by a high base of comparison, el Niño and drought effects rolling off, domestic demand waning, currencies appreciating, and widespread economic contraction. With this disinflation also came easy monetary policy from central banks. Most central banks in EM have an inflationary mandate. As inflation falls (current, forecasted, and expectations), they are able to reduce domestic interest rates. For example, the central bank of Brazil cut 525 basis points, Indonesia cut 300 basis points, and Colombia cut 225 basis points. With the drop in interest rates domestically and growth acceleration abroad, investor flows began to flood the local markets. This market recovery has now given way to some economic recovery but it isn’t over in our opinion. Central banks still have the capacity to compress the real rates further with inflation falling faster and lower than most of the market expected. With this rate compression, we should see credit growth come back, which should improve the business climate as well as support consumer borrowing and spending. 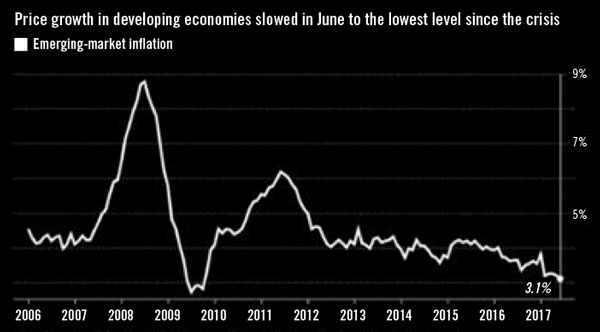 This information is not intended to provide investment advice. Nothing herein should be construed as a solicitation, recommendation or an offer to buy, sell or hold any securities, market sectors, other investments or to adopt any investment strategy or strategies. You should assess your own investment needs based on your individual financial circumstances and investment objectives. This material is not intended to be relied upon as a forecast or research. The opinions expressed are those of Driehaus Capital Management LLC (“Driehaus”) as of August 2017 and are subject to change at any time due to changes in market or economic conditions. The information has not been updated since August 2017 and may not reflect recent market activity. The information and opinions contained in this material are derived from proprietary and non-proprietary sources deemed by Driehaus to be reliable and are not necessarily all inclusive. Driehaus does not guarantee the accuracy or completeness of this informa­tion. There is no guarantee that any forecasts made will come to pass. Reliance upon information in this material is at the sole discretion of the reader.

Ayman Ahmed is an assistant portfolio manager and a senior analyst on the Emerging Markets Team with a focus on macro and financial research. To follow Ayman on our Twitter feed, look for tweets ending in AA.