A truckload shipment typically consists of a single trailer, often filled or nearly filled to capacity, dedicated to a single customer’s cargo and shipped point-to-point over one to three days. According to the American Trucking Association, the domestic truckload industry is a roughly $312 billion industry. Despite its large size, the truckload industry is very fragmented, with the top player representing less than 4% of the total market. Due to this market fragmentation, shippers have typically held the upper hand in contract rate negotiations with truckload carriers.

While shippers typically hold the upper hand in negotiations, several recent developments are swinging the negotiating pendulum back towards carriers. As shown in Exhibits 1 and 2, truckload spot rates have spiked, contract rates are near two-year highs, and demand levels relative to available trucks are trending well above five-year averages. Many of these factors will prove temporary, but some could prove structural, and cause the tight truckload market to persist. 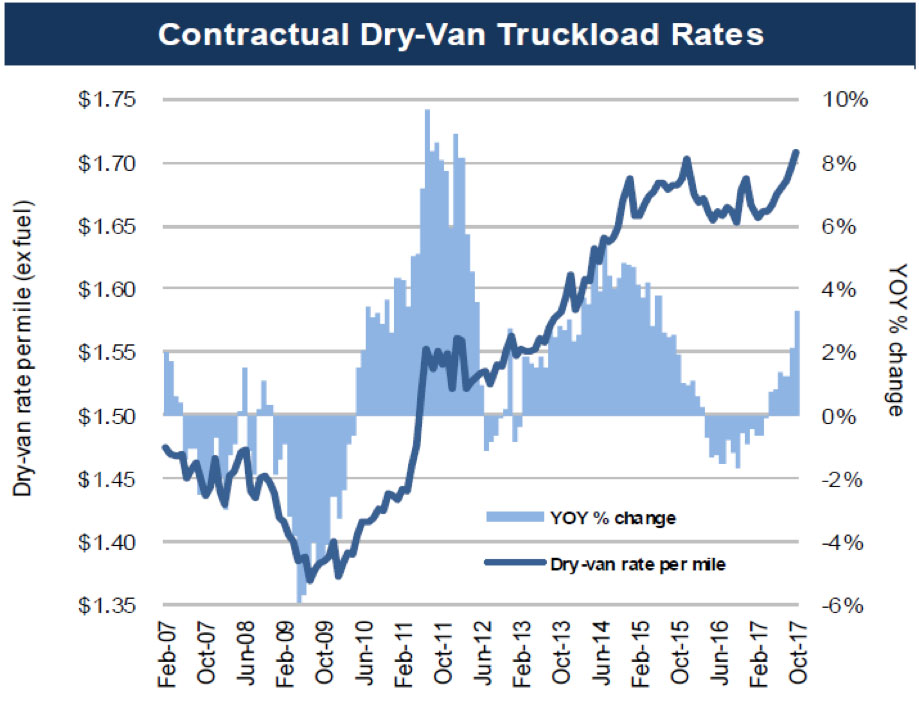 A secondary beneficiary of the tight truckload market could be the less-than-truckload (LTL) market. The LTL market typically consists of cargo from several shippers that is consolidated on one truck at a distribution center and then dropped off at multiple locations. According to the American Trucking Association, the LTL market is roughly $40 billion in size, about one-tenth the size of the truckload market and significantly more consolidated with the top eight players making up roughly 60% of the market. Due to this size difference, any freight that overflows from a tight truckload market could significantly impact the LTL market as 1% of the truckload market overflow would be equivalent to roughly 10% of the LTL market. We are already seeing evidence of this as two public LTL players recently reported increases in November shipments of 9-11% per day.

At Driehaus we are focusing our efforts in identifying attractive growth investment opportunities within both the truckload and less-than-truckload markets that could benefit from these trends.

This information is not intended to provide investment advice. Nothing herein should be construed as a solicitation, recommendation or an offer to buy, sell or hold any securities, market sectors, other investments or to adopt any investment strategy or strategies. You should assess your own investment needs based on your individual financial circumstances and investment objectives. This material is not intended to be relied upon as a forecast or research. The opinions expressed are those of Driehaus Capital Management LLC (“Driehaus”) as of December 2017 and are subject to change at any time due to changes in market or economic conditions. The information has not been updated since December 2017 and may not reflect recent market activity. The information and opinions contained in this material are derived from proprietary and non-proprietary sources deemed by Driehaus to be reliable and are not necessarily all inclusive. Driehaus does not guarantee the accuracy or completeness of this informa­tion. There is no guarantee that any forecasts made will come to pass. Reliance upon information in this material is at the sole discretion of the reader.