Ushering in a new era for the drug industry

By the US Growth Equities Team

Ushering in a new era for the drug industry

The drug industry ushered in a new era this past March with the first US approval of a biosimilar. While long discussed as a threat, most within the industry were dismissive until the eve of this approval. Now, with the precedent set, biosimilars present a risk to existing franchises, but also present an opportunity for companies seeking to manufacture biosimilars.

Biosimilars could be big business
When easily copied small-molecule drugs enter the market as generics, they tend to quickly erode the brand name’s revenue by 90% or more by competing on price. The difficulty in copying biologic drugs, however, has led investors to conclude that such an erosion would not occur with biosimilars. This dynamic has historically led to biologic companies receiving a premium valuation because, unlike their small-molecule brethren, they had been thought to lack a “patent-cliff.” Further, before the Affordable Care Act was signed into law, there was no formal mechanism for the FDA to approve copies of biologic drugs. 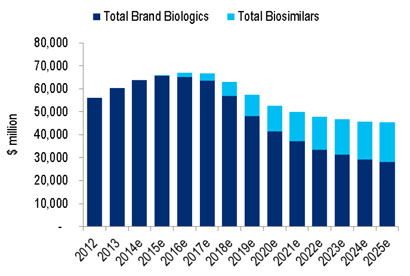 The first US “biosimilars”
The Affordable Care Act established a path for the FDA to review and approve generic biologics. While not as explicit as it could be, it nonetheless established a route to market. The industry has come to call generic biologics “biosimilars,” because despite all the fancy technology housed in the drug industry, the capability to definitively copy such large molecules is still lacking. As a result, the hoops that must be jumped through by biosimilar manufacturers are greater in number than for small-molecule generics. Despite these extra hoops, the industry is now clamoring to understand how it will affect sales.

Europe provides roadmap, perhaps
Biosimilars have been available in Europe for many years. The penetration rate there may give clues as to how the US biosimilar market will play out. Within Europe, the penetration rate by country is highly variable, with some countries like Greece, Austria and Romania showing high biosimilar penetration rates. Other countries, like Sweden, Italy and Belgium, however, have been more reticent to adopt biosimilars. The reasoning for such disparate adoption is variable, however the key concerns of physicians around the world are whether biosimilars will be as safe and effective as their brand name counterparts. The experience in Europe has shown that their safety and efficacy can differ. 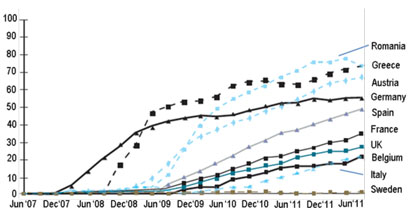 Time will tell
While the regulatory process in the US should give physicians additional comfort over their European peers, there will be lingering questions that will only be answered with time. Investors have long dismissed the future impact of biosimilars, but the tide is shifting. We think that the pure-play biosimilar manufacturers are in the early innings of establishing themselves as real businesses, and as they do we anticipate a meaningful opportunity for astute investors.

This information is not intended to provide investment advice. Nothing herein should be construed as a solicitation, recommendation or an offer to buy, sell or hold any securities, market sectors, other investments or to adopt any investment strategy or strategies. You should assess your own investment needs based on your individual financial circumstances and investment objectives. This material is not intended to be relied upon as a forecast or research. The opinions expressed are those of Driehaus Capital Management LLC (“Driehaus”) as of April 2015 and are subject to change at any time due to changes in market or economic conditions. The information has not been updated since April 2015 and may not reflect recent market activity. The information and opinions contained in this material are derived from proprietary and non-proprietary sources deemed by Driehaus to be reliable and are not necessarily all inclusive. Driehaus does not guarantee the accuracy or completeness of this informa­tion. There is no guarantee that any forecasts made will come to pass. Reliance upon information in this material is at the sole discretion of the reader.

About US Growth Equities

The Driehaus US Growth Equities team focuses on investing in US-listed equities of public companies with market capitalizations between $100 million and $10 billion. The team is led by Jeff James.