One of the most disruptive consumer technology trends of the last decade was the adoption of smartphones, which resulted in a dramatic shift in the market share of cellular phone vendors. The adoption of smartphones followed a typical S-curve, with cutting edge innovation and falling prices stimulating demand. Mass adoption of smartphones started in North America, followed by Western Europe, and finally, as prices became affordable, in developing countries within Asia and Africa. However, as with every technology product that follows the S-curve adoption, smartphones have hit a saturation point, globally. As a result, smartphone unit growth rate has steadily decelerated with expected year-over-year growth in 2016 estimated at less than 10% (Exhibit 1). 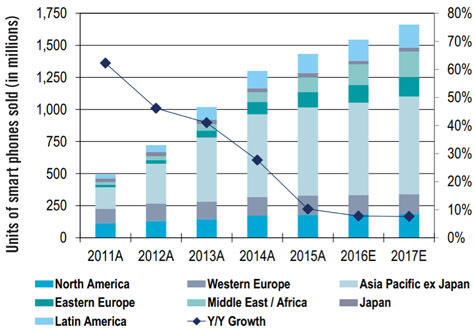 Though smartphone units have reached the saturation point, wireless carriers around the world are still upgrading their networks to the latest wireless standard, 4G LTE (Long Term Evolution). This wireless standard enhances efficiency, allowing more bandwidth to be transferred within the same spectrum. Wireless carriers will see lower capital expenditure intensity over time, but to deploy 4G LTE networks their subscribers must be using 4G LTE-enabled smartphone devices. Developed markets have been early adopters of 4G LTE smartphones but developing and frontier markets, which constitute the bulk of mobile subscribers, are still in the third or fourth inning of adoption. Exhibit 2 shows the changing global mix of subscribers, wherein the number of 4G LTE smartphones is expected to more than double over the next two years. 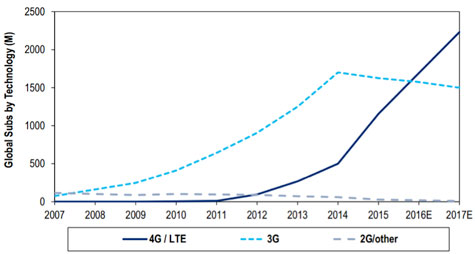 Within the Driehaus portfolios, we are focused on attractive growth investment opportunities in semiconductor companies that are uniquely positioned to post robust growth as the shift to 4G LTE smartphones continues. At the same time, we are avoiding companies that have seen saturation in market share and are tied to smartphone unit sales or leveraged to older generation 3G networks. Further up the supply chain, we also are interested in companies that supply semiconductor chipsets used in 4G LTE equipment. While the adoption of 4G LTE is well underway in the US, the slower shift globally allows time for select companies within this space to see substantial earnings growth.

This information is not intended to provide investment advice. Nothing herein should be construed as a solicitation, recommendation or an offer to buy, sell or hold any securities, market sectors, other investments or to adopt any investment strategy or strategies. You should assess your own investment needs based on your individual financial circumstances and investment objectives. This material is not intended to be relied upon as a forecast or research. The opinions expressed are those of Driehaus Capital Management LLC (“Driehaus”) as of February 2016 and are subject to change at any time due to changes in market or economic conditions. The information has not been updated since February 2016 and may not reflect recent market activity. The information and opinions contained in this material are derived from proprietary and non-proprietary sources deemed by Driehaus to be reliable and are not necessarily all inclusive. Driehaus does not guarantee the accuracy or completeness of this informa­tion. There is no guarantee that any forecasts made will come to pass. Reliance upon information in this material is at the sole discretion of the reader.

Prakash Vijayan is an assistant portfolio manager and senior analyst on the US Growth Equities Team with a focus on the information technology and communication services sectors.