Will FAST Act Speed up Spending?

Will FAST Act Speed up Spending?

On December 4, 2015, President Obama signed into law the Fixing America Surface Transportation Act or “FAST Act”. The FAST Act authorizes $305 billion of federal funding from fiscal year 2016 to 2020 for new infrastructure projects such as highways, roads, bridges and transit lines. This bill is significant as it is the first long-term federal transportation funding bill that has been passed since 2005, and it follows 36 short-term extensions. 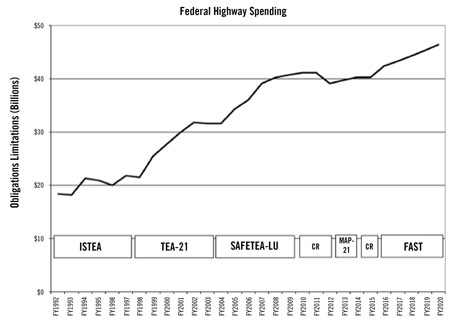 While the FAST Act may have a lower annual spending increase when compared to prior long-term bills, the more significant effect will come from state transportation departments having five years of funding visibility for the first time since 2005. Previously, many states delayed transportation projects due to uncertainty over funding, but this bill will enable larger, longer-term projects to move forward. We believe the FAST Act will lead to increased bidding opportunities, rising backlogs, and higher earnings for several public companies that are exposed to public construction end markets.

This information is not intended to provide investment advice. Nothing herein should be construed as a solicitation, recommendation or an offer to buy, sell or hold any securities, market sectors, other investments or to adopt any investment strategy or strategies. You should assess your own investment needs based on your individual financial circumstances and investment objectives. This material is not intended to be relied upon as a forecast or research. The opinions expressed are those of Driehaus Capital Management LLC (“Driehaus”) as of March 2016 and are subject to change at any time due to changes in market or economic conditions. The information has not been updated since March 2016 and may not reflect recent market activity. The information and opinions contained in this material are derived from proprietary and non-proprietary sources deemed by Driehaus to be reliable and are not necessarily all inclusive. Driehaus does not guarantee the accuracy or completeness of this informa­tion. There is no guarantee that any forecasts made will come to pass. Reliance upon information in this material is at the sole discretion of the reader.